Voice Over is concerned with the voice of the individual victim in war, especially where journalists and media professionals converge on conflict, co-opting such voices as one of many elements in a narrative.

In the 1990s, as nation states were being redefined and ethnically cleansed in the former Yugoslavia, little was heard of refugees' voices in the British media. In May 1994 Frances Hegarty traveled to the Zagreb Centre for Women Victims of War, in Croatia. There she interviewed Zerafeta Prokić, Nena Makarević, Pasa Solo, and Mara Cvetić, via an interpreter. Voice Over is based on video recordings of these exchanges. 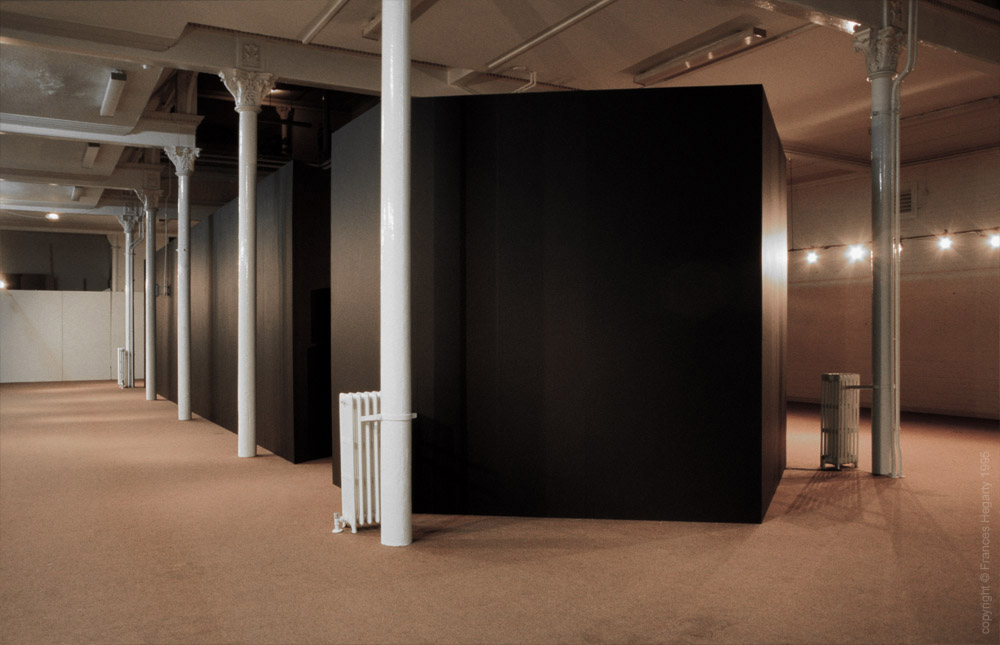 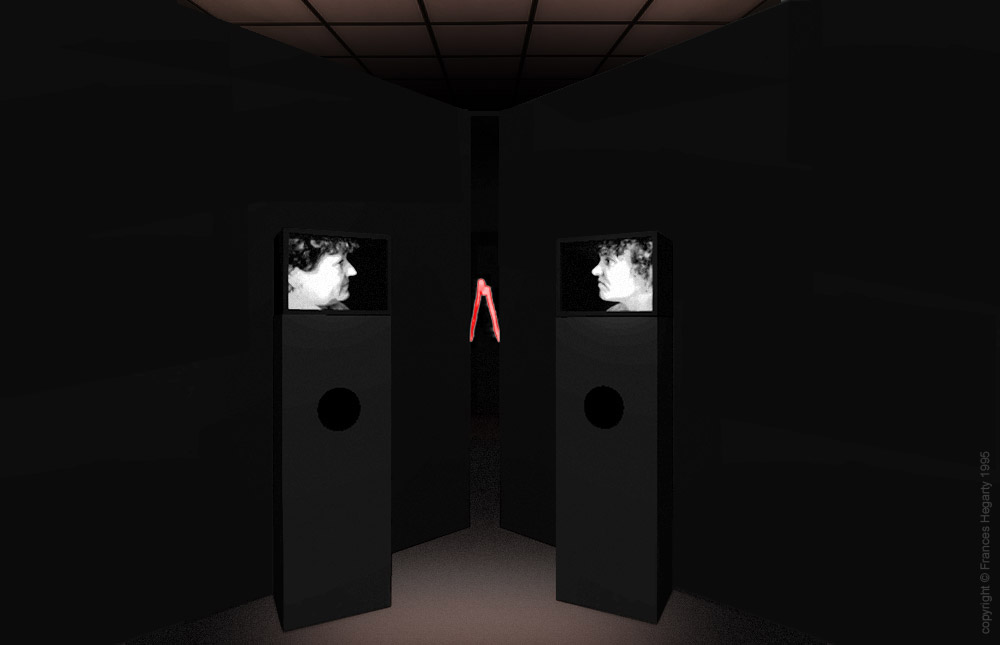 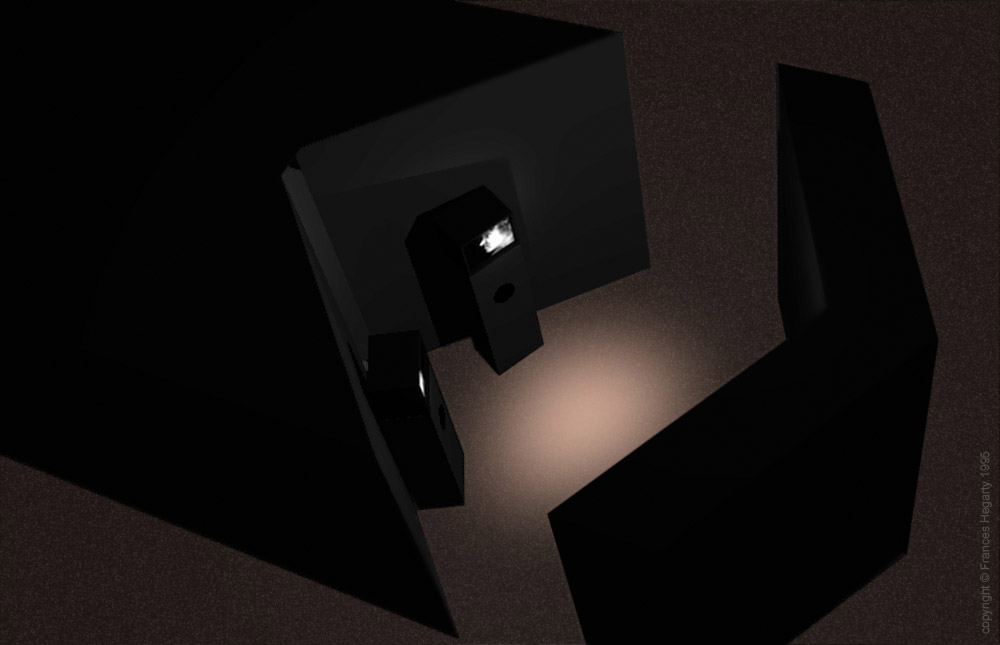 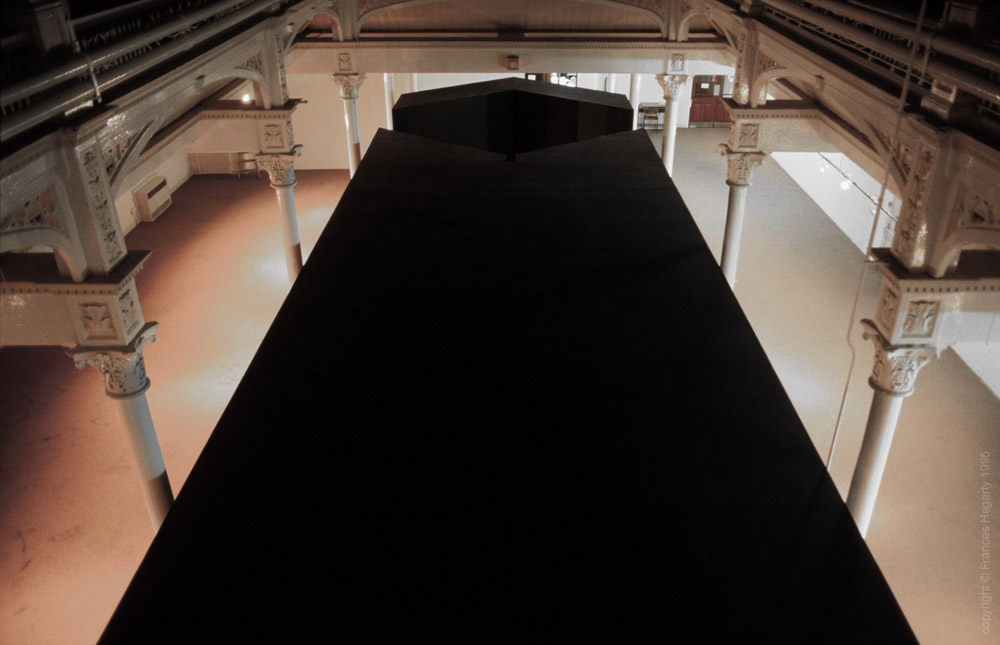 The installative architecture of Voice Over allows the viewer to follow examples of spoken testimony through a repeated series of sonic and linguistic transformations. These are analogous to processes of recording, translation, editing, composition and transmission characteristic of modern news-media, processes that may help or hinder the reception of any given testimony.

In the installation, Hegarty's interview subjects appear in profile on a pair of video screens. Although the screens are arranged to infer dialogue, any dialogue here is created artificially, through editing, drawing attention, at times, to the subtle signs of disconnectedness already evident in the speaking subjects.

All statements are heard first of all in the speaker's native language, from an aperture physically close to their image, and in-sync with it. Each statement is reiterated in English translation: a translator's voice emanating from openings farther away, in the screen-wall facing the video monitors. Additionally, every original-language statement is followed by a distorted echo and an oscilloscope trace, both occurring at the far end of a dark void, accessible to scrutiny only via a narrow slit between the video monitors.

The women appearing on-screen speak of seemingly ordinary aspects of their former lives (such as gardens, or favourite rooms). Nevertheless, all that is spoken of has been lost, and many of the women's statements hint at things unsaid, perhaps too difficult to say. In other words, the information yield of this testimony is as much inferred as directly stated, and is thus especially vulnerable to elision and misapprehension.

In Voice Over, Hegarty suggests that, in situations such as those alluded to in the work, the risk to subtle or profound communication lies not so much with the bearers of testimony or their listeners, but with a cycle of technological transformation that becomes engrossing in itself, demanding attention for its own sake.